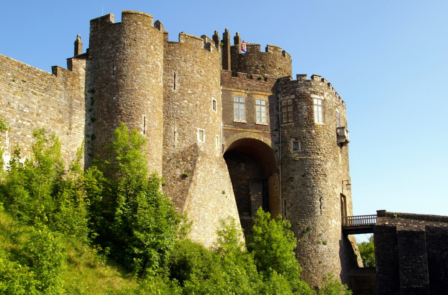 Known as the Key to England, Dover Castle has been in our nation's first line of defence for centuries, guarding our shores from invasion for 20 centuries.

Step into the dazzling medieval royal palace in the Great Tower, where you can immerse yourself into the King's court life; meet the first of many of the lifelike projected figures guiding you round the sumptuously furnished chambers, and meet the costumed characters welcoming you to life at Dover Castle during the reign of King Henry II.

If the weather takes a turn, head underground and explore the darkly atmospheric Secret Wartime Tunnels that bury deep into the iconic white cliffs of Dover,  with vivid recreations telling the story of the Dunkirk evacuation, complete with dramatic projections of swooping Spitfires and real film footage.

With exciting exhibitions, winding tunnels to explore, ghosts to hunt out - and of course restaurants, shops and the space for youngsters to run around - an action-packed, great value day out awaits!