There is guidance in England and Wales on staying safe and protecting others in greenspaces. This fantastic itinerary offers the opportunity to explore ancient packhorse routes, drovers’ roads and bridleways. It’s a classic British mountain bike adventure across the spectacular terrain of the scenic Pennines.

Widdop Reservoir is located on the eastern side of the Mary Towneley Loop, in a… 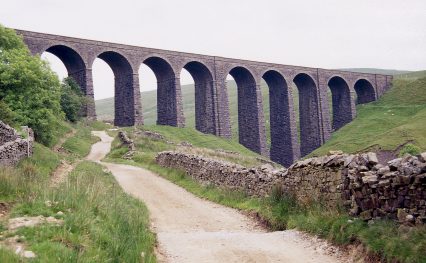 One of several viaducts on the Settle-Carlisle railway it has 11 arches, is 117ft high… From Settle to Clapham

Click the play button to see the highlights of the Pennine Bridleway. Click here to see other videos of the Pennine Trails.

Find useful facts and learn more about the Pennine Bridleway below. Select the blue tabs below for more details.

The Pennine Bridleway is a 205 miles (330 Km) long National Trail running through the Pennine hills from Derbyshire to Cumbria. It has been specially designed for horse riders, and is also great for mountain bikers and walkers. The route was opened in stages with the full 205 mile route opened by Martin Clunes in June 2012.

The Trail includes 2 large loops. The first is the Mary Towneley Loop in the South Pennines that was the first section of the Trail to open back in 2002. This is 47 miles long and makes a great weekend’s walk or ride although some mountain bikers like to try and do it in a day! The 2nd Loop is the 10 mile Settle Loop in the Yorkshire Dales. This makes an excellent days walk or horse ride and can be extended by using the bridleway network to take in the village of Malham too.

The Pennine Bridleway is not the same as the Pennine Way; it follows a different route and has been designed especially for use by horse-riders and cyclists.

The route runs through the Pennines so expect hills and changeable weather!

The route follows a variety of surfaces including minor roads, aggregate tracks, grassed stone tracks, stone setts and worn causey flags. Some of these have been newly created specifically for the Pennine Bridleway but some are ancient highways such as drovers roads or packhorse trails that have been in use for centuries.

The best time to complete the Trail is April to October, when the weather is most favourable.

The Pennine Bridleway is the only National Trail specifically designed to be used by equestrians although since the idea for the route was conceived mountain biking has really taken off and the Trail offers a fantastic challenge for cyclists too. The Trail provides an amazing long distance, largely off-road ride/walk through the Pennines following old drove roads, packhorse routes and new sections of bridleway. The route passes through varied and beautiful countryside following a succession of different types of tracks and surfaces. It is by no means easy but well worth the challenge and completing any or all of the route will provide a real sense of achievement.

Highlights of the Trail include the flora and fauna in the vibrant, clean and green Chee Dale Nature Reserve; stunning views over the Kinder plateau either side of the exhilarating yet peaceful Roych Clough (one of Britain’s classic mountain bike rides); panoramic views of the Pennines and valleys in Calderdale, Rochdale and Lancashire; the 6 compartmented water trough at Mankinholes where packhorse ponies stopped for refreshment; the Rochdale Canal.

New trails link with old to zig zag up, down and across the Lancashire moors on route to the village of Wycoller with its ancient packhorse bridge. The north Lancashire stretch offers a more pastoral scene and a bit of a breather before reaching the Dales. The Yorkshire Dales section features classic limestone landscapes, including great views of the nationally important Malham Tarn and the peaks of Ingleborough and Whernside; from Dales villages to remote open uplands via enclosed grassy tracks and wide drove roads with glimpses of limestone pavements, impressive viaducts on the Settle to Carlisle railway, and a prizewinning new bridge. The views just keep coming once up on Lady Anne’s Highway with views along the Mallerstang valley and a final push from the High Dolphinsty to the Cumbrian village of Ravenstonedale.

Discover reminders of the packhorses and drovers who passed this way leaving behind beautiful bridges and water troughs and wayside inns. Later reservoirs and waterways add variety and interest to the landscape. Hollingworth Lake is a 130 acre reservoir constructed in 1801 to supply water for the Rochdale Canal. The lake is a hive of activity and in Victorian times was known… A public horse riding arena near Greenfield, owned by Oldham Council with parking and links directly to the Pennine Bridleway.  The arena is cared for by Oldham Countryside Service and… A warm, friendly welcome awaits at this tea room situated right on the Pennine Bridleway.  The cafe is open all year round, offering a selection of home cooked meals and… Popular cafe and bakery in Settle market place dating back to 1663, memorable name as well as good food. Though we can't promise you will see any - perhaps just… The 121 foot high monument of Stoodley Pike is visible from miles around. It was designed by local architect James Green in 1854 and the building was completed in 1856… Wycoller Country Park is one of the prettiest Country Parks in Lancashire. The area is famous for its association with the Brontè sisters who referred to many of the nearby… One of several viaducts on the Settle-Carlisle railway it has 11 arches, is 117ft high and 220 yds long. The viaduct is built of massive blocks of Dent "marble" - a…