The England Coast Path is opening in sections. The open sections are described here. The path aims to stay as close to the coast as possible. In many places that means you will be walking right alongside the coast. In some places the path heads inland, usually only for short distances. The open sections of the path are well signed, look out for the distinctive acorn waymarkers. Away from towns and villages you will usually find the path has a natural, unmade surface, some areas will get muddy in wet weather. Closer to where people live you might find smooth surfaced paths, and in towns and villages you may be walking on promenades or pavements alongside roads.

The Calshot to Gosport stretch of the England Coast Path is a 23.3 mile/37.5km trail which encompasses a mixture of rural and urban areas. The coastline is dominated by the Oil refinery to the west and the densely populated city of Southampton at its northern extent providing many opportunities for leisure activities and refreshments. Small towns and villages along its eastern side such as Hamble-le-Rice are interspersed with farmland, cliffs and beaches. The stretch includes many historical sites including Royal Victoria Country Park and museums reflecting its rich maritime heritage.

There are plenty of opportunities for wildlife watching at the many nature reserves along the route, including Calshot Marshes Local Nature Reserve and Hook-with-Warsash National Nature Reserve. Things you can expect to see include: Teal, Ringed Plover, Grey Plover, Black Tailed Godwit, Redshank and Dunlin. The stretch also includes two ferry rides, one from Hythe to Southampton Quay across Southampton Water, and the ‘Pink Ferry’ across the River Hamble to Hook-with-Warsash.

The Gosport to Portsmouth Stretch of the England Coast Path is a 28.69 miles / 46.7 KM trail which is predominantly urban in character. The coastline is dominated by the towns of Gosport to the west, Fareham at the northern end of the Harbour, and the densely populated city of Portsmouth, on Portsea Island. In addition to residential areas, there are leisure areas, most notably two golf courses, recreation grounds, and several marinas. Areas such as Gosport, Portsmouth and Fareham host many shops, pubs and cafes in the vicinity of the Harbour’s waters, with Gunwharf Quays being a particularly significant retail site in Portsmouth. Parts of the Harbour are industrial in nature, with a working container port plus continental ferry terminal. The stretch features many important historical sites and museums, reflecting its rich maritime heritage. Notable tourist destinations include the Portsmouth Historic Dockyard and Portchester Castle.

Towards the beginning of the trail there is Browndown Site of Scientific Special Interest (SSSI) and the Gilkicker Lagoon SSSI. Although the lagoons saltiness creates a harsh environment where species have to adapt to survive, five species of mollusc of national rarity live in the lagoons. There are other natural environments present along the stretch, such as shingle beaches, mudflats and saltmarsh, which support particularly diverse birdlife. There are a small number of islands in the harbour, one of which is managed by the RSPB for nesting birds.

This easy to follow 33-mile (53km) stretch of the England Coast Path linking Shoreham-by-Sea to Eastbourne opened in May 2022.

This new trail covers a wealth of unique environments. Setting off from Shoreham-by-Sea, you cross the River Adur estuary. Here migratory wading birds and waterfowl can be seen on the saltmarsh and mud flats. Other sights include the old lighthouse in Shoreham Harbour with views of its maritime use, including unique houseboats, traditional boat yards and large commercial ships as they pass through Shoreham Port.

The trail leads onto Hove Esplanade – on route to Brighton, where remains of West Pier can be spotted, and the Brighton i360 viewing tower can be seen – the tallest structure in Sussex. Walking along the bustling promenade on Brighton seafront up to Palace Pier then past Brighton Marina. Here you can follow the Undercliff Walk as far as Saltdean. (There is also the option to take the clifftop route here.)

Once reaching Saltdean chalk clifftop, the walk leads you to Peacehaven and on to Newhaven. In Newhaven several nature reserves, including Castle Hill Local Nature Reserve and Ouse Estuary Nature Reserve can be visited. A host of wildlife including migratory and nesting birds like lesser whitethroat and fulmars, wildflowers like birds’ foot trefoil and thrift, and plenty of butterflies and insects can be spotted.

There are also historical sites to see in Newhaven, including WWII gun emplacements and the 19th century Newhaven Fort. By the harbour, the quayside promenade offers great views of the fishing and leisure boats and the large Newhaven-Dieppe ferries that dock here.

Eastwards from Newhaven, the trail firstly goes around low-lying Seaford Bay including Tide Mills to Seaford esplanade, before reaching the Sussex Heritage Coast at Seaford Head. This famous and well-known stretch of coastline along the Sussex coast includes the iconic chalk cliffs of Seaford Head, Seven Sisters and Beachy Head, where the South Downs National Park meets the sea.

On this path you pass Cuckmere Haven, which is a popular visitor location for walkers, dog walking, bird watching, visiting the beach and for photography, as there are amazing views of the Seven Sisters chalk cliffs and Cuckmere River meanders.

On the eastern side of the Cuckmere River estuary is the Seven Sisters Country Park at Exceat, where the England Coast Path joins the existing South Downs Way National Trail. This follows the clifftop footpath along the Seven Sisters, Birling Gap, Belle Tout, Beachy Head and Eastbourne.

Beachy Head is another internationally famous site for both locals and visitors, with glorious views both seawards along the coast towards Hastings and on a clear day towards Dungeness and inland across the South Downs to Firle Beacon.

This stretch of the England Coast Path ends at Eastbourne Pier, where you can walk along the promenade by the sea in this popular coastal town.

How do I get to the Shoreham-by-Sea to Eastbourne section of the England Coast Path?

There are train stations within easy access to the coastal path, including at Shoreham by Sea, Portslade, Brighton, Newhaven, Seaford and Eastbourne. With good connections along the coast and to London.

There are regular buses along the A259 coast road between Brighton and Eastbourne, providing opportunities to hop on and off the bus close to the coastal trail, including the Sussex Heritage Coast.

This stretch of coast includes the unique area of Dungeness, the largest expanse of shingle in the country. Its wild landscape is home to a beautiful shingle flora that holds a third of all plants in the UK. You can see Derek Jarman’s unusual shingle garden, two lighthouses and enjoy a bite to eat and a ride on the narrow gauge Romney, Hythe and Dymchurch railway – all within view of the vast Dungeness nuclear power station.

There is much evidence of historical wartime defences along the coastline: Napoleonic Martello towers, the Royal Military Canal at Hythe, now a pretty waterway; the amazing Listening Ears at Lade which provided an early form of radar to detect enemy aircraft and a floating harbour from WW2 at Greatstone. Indeed, there is still plenty of present day military activity, the MoD ranges at Lydd and Hythe train soldiers today.

There are wide expanses of lovely beaches at Camber and Greatstone, with fantastic views along the coast. Enjoy a special and unique part of the coast here!

This stretch showcases England’s iconic White Cliffs with their stunning views across to France, the wild area of Sandwich Peninsula with much wildlife, particularly birds, and views out across the extensive mudflats. Walkers can enjoy cliff top walks and more level areas around Deal, Sandwich and the lower cliffs at Ramsgate. There is a huge range of history here: the Romans landed at Richborough in AD43, medieval castles at Dover, Deal and Walmer, the historic Cinque Port of Sandwich, Napoleonic defences including the astonishing Drop Reboubt fort at Dover and numerous sites from both World Wars. Ferries taking troops, ammunition and horses across the channel used this coastline – there is no shortage of interesting sites and view points such as St Martin’s Battery at Dover.

The path has easy access by road, rail and ferry, so is a great resource for visitors from home and abroad. There are plenty of welcoming cafes, restaurants and pubs along the way for refreshments – a necessity after a great day’s walk!

Walkers can follow a continuous route from Woolwich to the sea on the Isle of Grain.

This 49 mile (79km) stretch joins Grain – on the Isle of Grain – with the Woolwich foot tunnel. From Woolwich a new section links up with the Thames Path, creating a continuous, way-marked route from the source of the Thames, Gloucestershire, through the centre of London, to the sea. This new section of national trail, from London to Grain, will allow walkers to enjoy fantastic views, while taking in the natural and cultural heritage of this uniquely diverse and fascinating stretch of the coast.

From Woolwich the route follows closely along the south bank of the Thames. The river has long been a busy port, as numerous wharves and jetties – many of them redundant – will testify. In places, new stylish residential developments – with wide promenades, benches, and trees – are springing up to replace derelict industrial sites. Elsewhere, the route passes numerous heritage sites, including the impressive Woolwich Arsenal with a long history of providing armaments and ammunition for the British army and navy. But this is also a working landscape and interspersed with historic sites are busy wharves, industrial complexes, the magnificent Queen Elizabeth II Bridge, and at Swanscombe: the largest pylon in Europe.

And there is no shortage of wildlife, even close to the centre of London on some of the more industrialised sections. At low tide a wide variety of birds can be seen feeding on the mud, and it is not unusual to see the occasional grey seal hauled up on one of the many small beaches. Heading eastwards towards the Isle of Grain the industrial landscape fades away. Industrial heritage is replaced by long stretches of remote grazing marsh, and between the Napoleonic fort at Cliffe and the village of Allhallows there is nothing but wildness – twelve miles of sea, sky, and grazing marsh.

How do I get to the Grain to Woolwich section of the England Coast Path?

There is a bus service along the A228 between Grain and the Strood and Rochester area where there are railway stations. Visit the Traveline website to plan your journey. 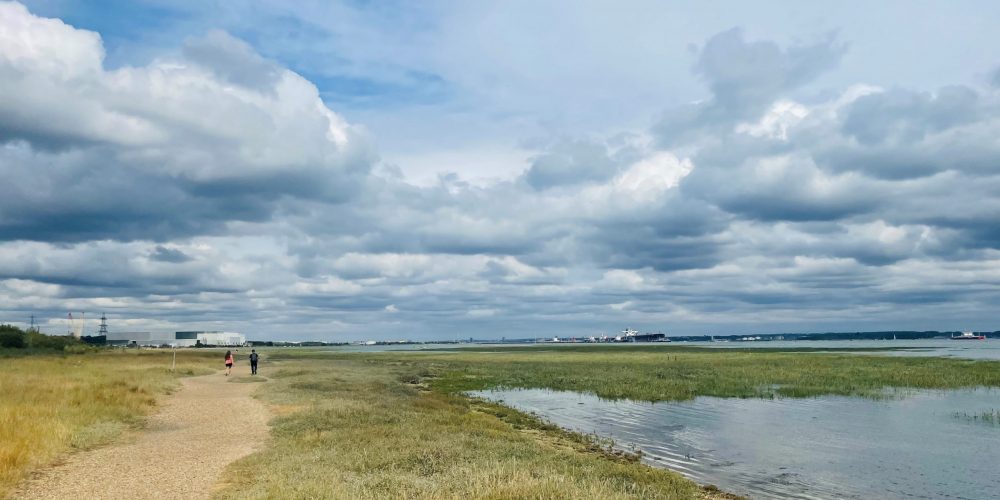 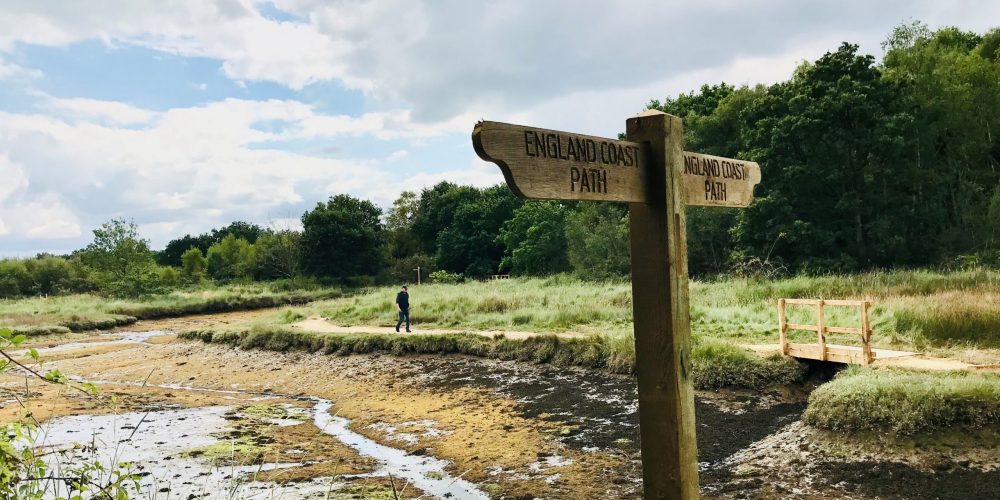 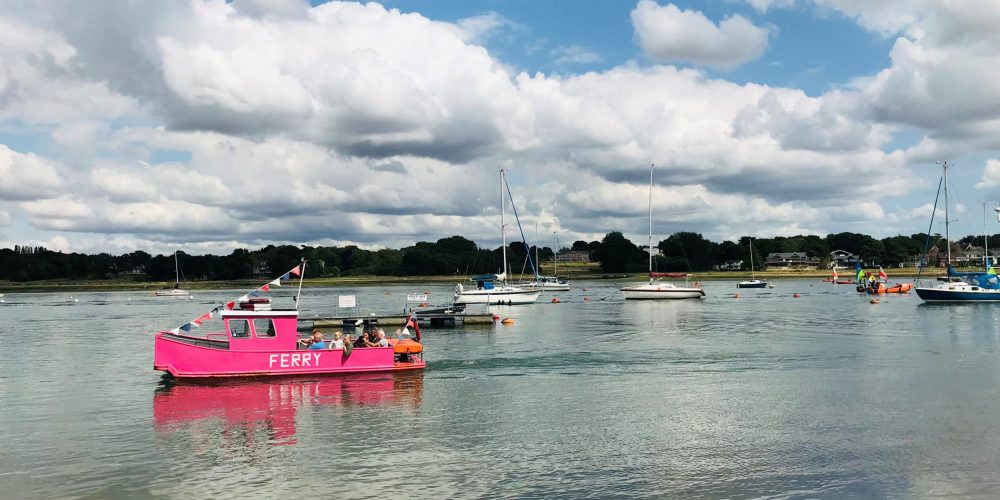 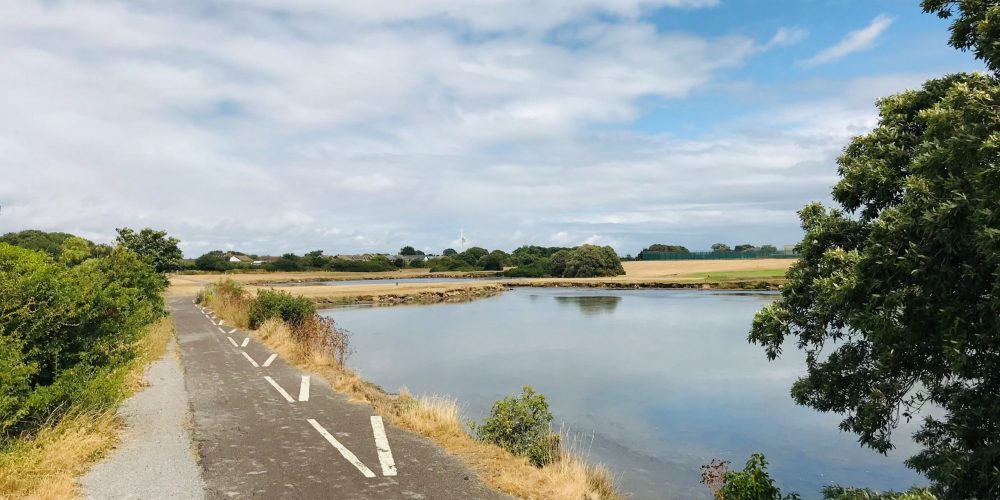 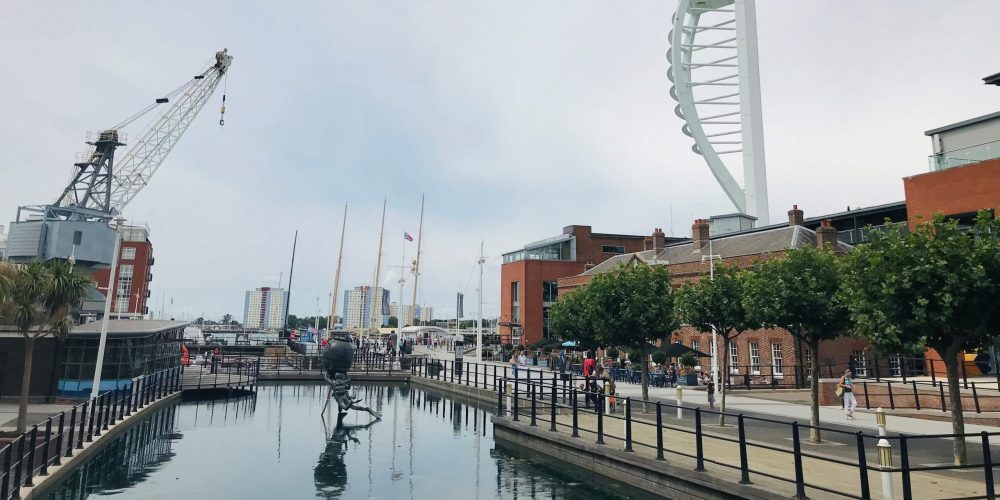 Path through Gunwarf with Spinnaker Tower 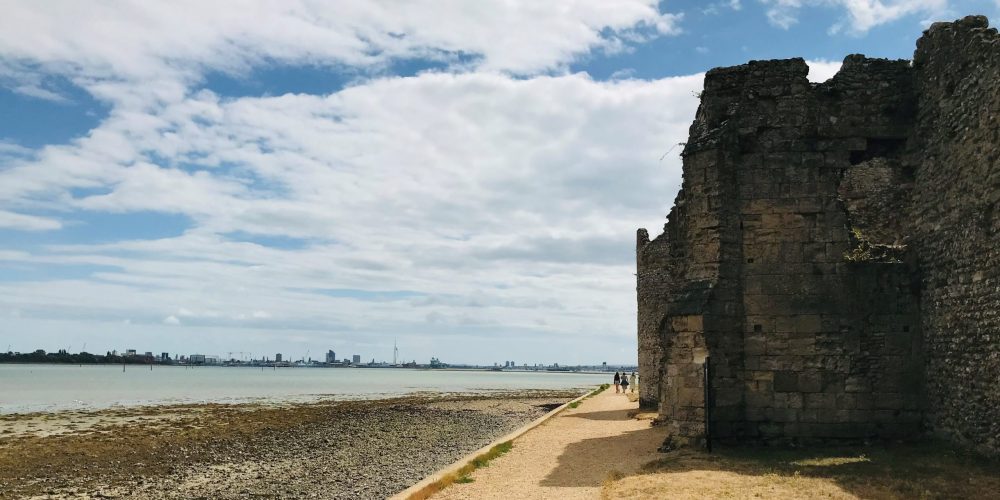 View of Portchester Castle and Harbour from the England Coast Path