The Norfolk Coast Path stretches right around the edge of the East Anglian county. But it reaches its zenith on the section between the classic seaside towns of Sheringham and Cromer. This ancient shoreline, formed two million years ago and still flecked with fossils, is lined by tall, dramatic cliffs. Indeed, Norfolk’s highest point is here. Though, in this famously flat region, that is only 105m…

But lack of height does not mean lack of drama. From the wide wind-blustered shores (popular with bathers, surfers and sometimes seals) to the unspoiled rural hinterland, this is a landscape rich in history – that’s why its named the Deep History Coast. Woolly mammoths, marauding Vikings, eccentric Georgians and holidaying Victorians have all left their marks here. And thanks to a network of designated trails – including long-distance routes like the Norfolk Coast Path and the Weavers’ Way – it’s simple and enticing to discover it for yourself. 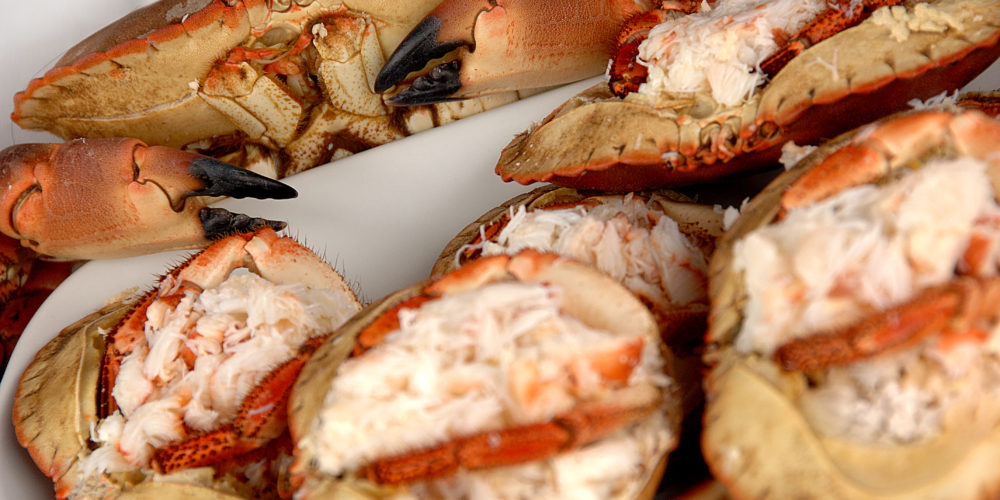 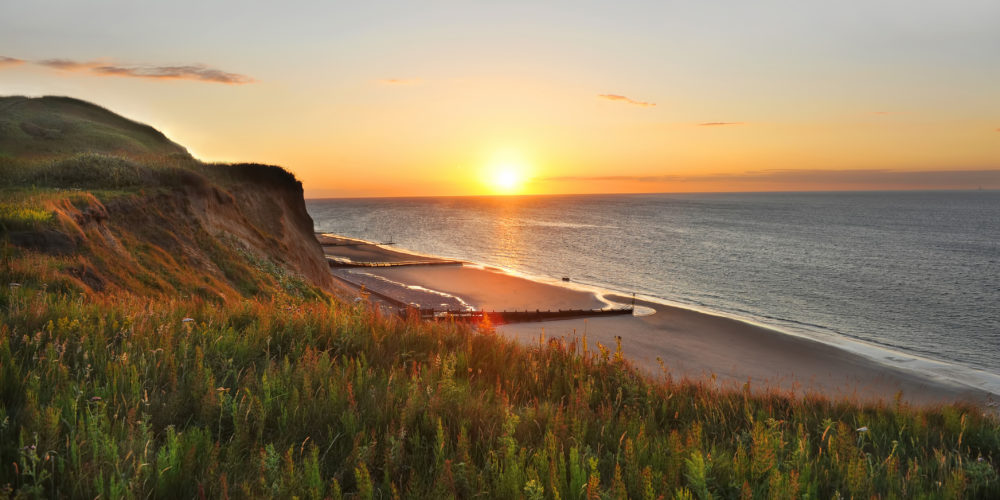 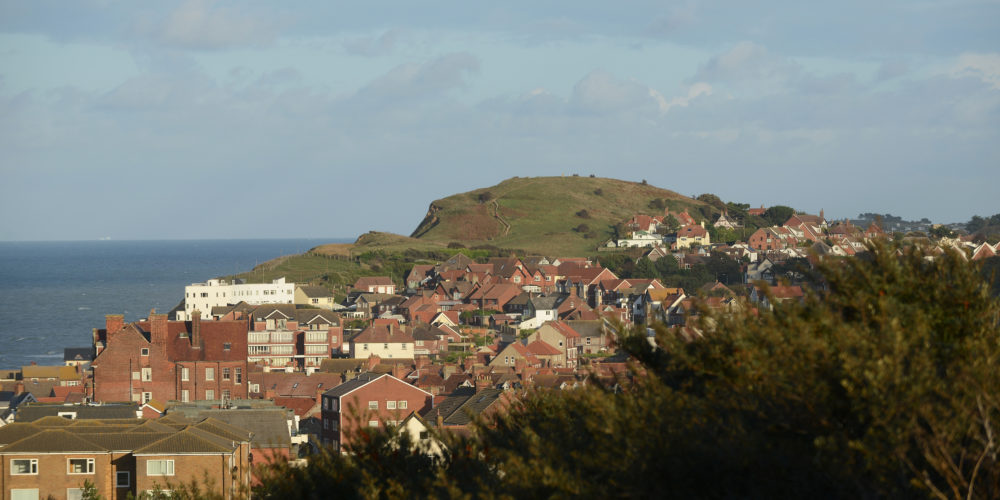 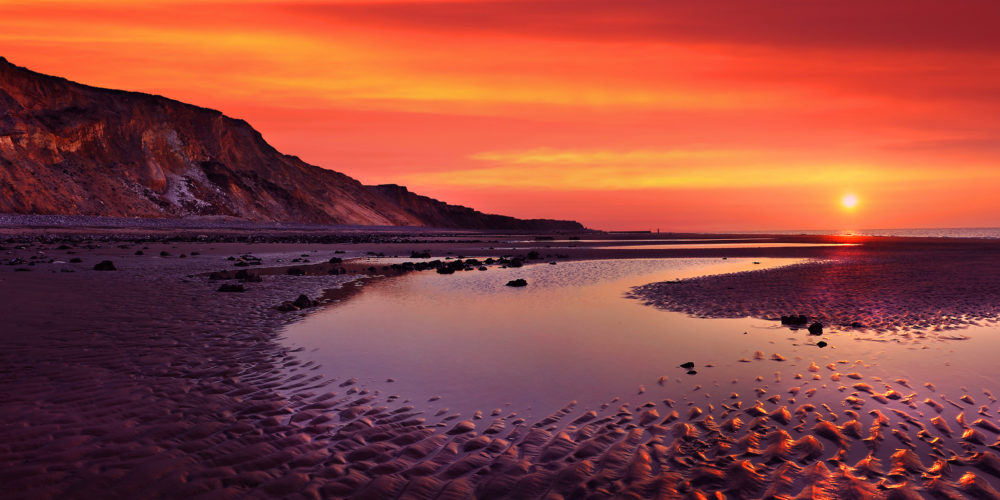 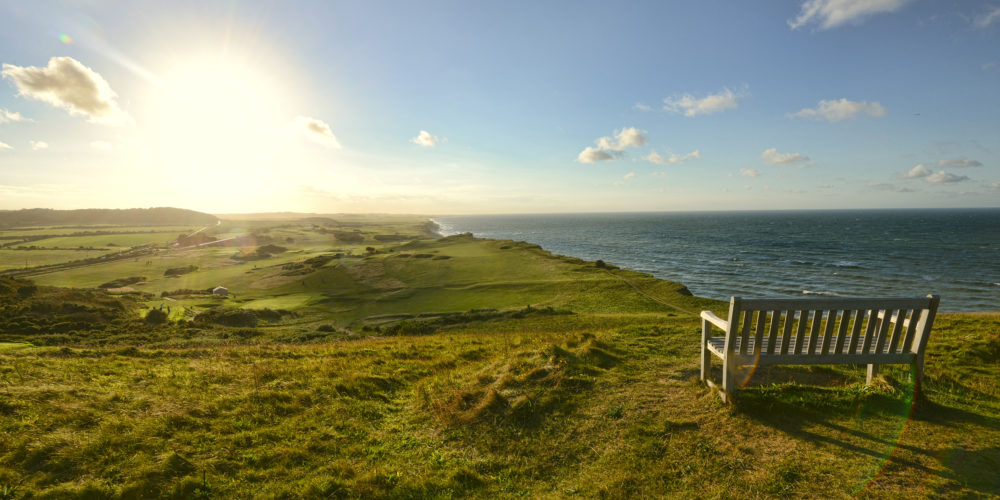 Here’s everything you need to help you plan your very own walking and exploring break in North Norfolk. Click on the blue arrow tabs below for more information. To save this itinerary to view later, use the Save to My Rucksack button at the top of the page.

Start in the town of Sheringham (accessible by train). Its name harks back to Viking times – it means ‘the Ham of Scira’s people’d. But its look is old fishing village and Victorian seaside charm, with independent shops and tearooms set behind the wide sand-and-shingle beach.

Pick up the Coast Path by the promenade’s bright beach huts and follow it west to Weybourne along a crest of cliffs. Part of Norfolk’s Deep History Coast, this is the Cromer Forest Bed: here, you’re walking on land that began forming two million years ago, rich in fossils and ancient footprints. If the tide is low you can look down on Robin’s Field, part of a rare offshore chalk reef only recently explored. It’s a refuge for over 350 different marine species, some found nowhere else in the world.

At Weybourne, stop for lunch at the Ship Inn, a traditional North Norfolk pub serving fish landed at the beach nearby. Then you have choices. You could walk straight back to Sheringham, veering inland via the woods and gardens of Sheringham Park, designed by Humphry Repton in 1812. Follow the trails that weave around the magnificent rhododendrons, magnolias and azaleas, climb one of the towers to take in the views of land and sea, and grab a coffee at the cafe.

Alternatively stay a little longer in Weybourne to visit the cliff-top Muckleburgh Collection, the UK’s largest privately owned military museum, sited on a former army camp. It’s packed with all manner of missiles, weaponry and armoured vehicles; you can even take a ride in a tank.

Also close to Weybourne is Kelling Heath Holiday Park, where you might consider staying – if only for the matchless ‘night life’. The park has been awarded official Dark Sky status: light pollution is so low here that it’s possible to see the Milky Way with the naked eye.

Kelling Heath is near to Weybourne station, a stop on the Sheringham-Holt Poppy Line North Norfolk Railway, which uses steam engines to pull an array of historic carriages. You could hop aboard and spend the afternoon riding to the Georgian market town of Holt and back, or head back to Sheringham, to chug through the rural hinterland towards the sea.

Overnight in Sheringham or nearby. There are many options – see Accommodation, left.

From Sheringham, set off along the Coast Path once more, this time heading east to Cromer, along the Cromer Ridge, a stretch of coast formed by retreating glaciers, thousands of years ago, and about as undulating as notably flat Norfolk gets.

Head up Beeston Bump, then descend to West Runton, a small village with a big secret. Following an accidental discovery by locals, a major excavation here in 1995 unearthed the most complete mammoth skeleton ever found in Britain. Walking these cliffs and heathland is to walk in the footprints of ancient beasts – not only mammoths, but bears, rhinos and hyenas. Consider lunch in West Runton – perhaps at the Links Country Park Hotel.

Then prepare yourself for the ‘mighty’ climb up Beacon Hill – the county’s highest point, at 105m! Then continue onwards, via an inland trail to another high-point, Incleborough Hill, to enjoy sweeping panoramic coastline views. From here, descend to Cromer, the ‘Gem of the Norfolk Coast’, with its late-Victorian and Edwardian architecture, high cliffs and wide beach. Climb the 172 steps to the top of the church tower for a bird’s eye view and wander along the 151m-long pier, where the end-of-pier show packs out the Pavilion Theatre all summer long. Be sure to sample a Cromer crab – these famously tender crustaceans are a local speciality.

Day 3 Along the Weavers’ Way

Linking Cromer to Great Yarmouth, taking an inland route via 100km of woodland, farmland, rivers, Broads and great country estates, the Weavers’ Way reveals a different side of the county. Inland from Cromer, a short way along the trail, is Felbrigg Hall, a 17th-century house with a grand Jacobean facade, an elegant Georgian interior and innumerable treasures – from the walled garden to the Chinese Bedroom. Enjoy Felbrigg in the morning, wandering the grand rooms and extensive parkland, before walking south towards the village of Erpingham.

Depending on your pace and inclination, this afternoon you could branch off the Weavers’ Way at Aldborough to pick up part of the Cromer Explorer Loop which will take you to Maninghall Hall. The gardens around this medieval moated manor are a delight: roses in all hues, formal borders, wildflower swathes, a Saxon chapel and a Sensory Garden, where plants are selected for, sight, sound, taste, scent and touch. Breathe in the fragrant air and revive yourself with a cuppa in the tearooms. If you don’t have time for this today, perhaps slot it in tomorrow, after breakfast.

Complete the loop and finish your day at the Saracens Head, a wonderful oddity, nestled in the Norfolk countryside. Built for Lord Walpole in 1806 in a distinctive Italianate style, it’s now a welcoming inn offering real ales, big log fires, homecooked food and comfy beds to passing travellers.

Day 4 On to Aylsham

Rise and shine at the Saracens Head, taking your time over a good breakfast before setting out for a treat: Blickling Estate. The Weavers’ Way leads right to this spectacular Jacobean mansion, which is best approached on foot, so you see it rise gradually from the surrounding countryside.

The estate, run by the National Trust, is huge – spend time walking across the grounds, via the Long Plantation, Great Wood, Mausoleum and lake, via the orangery, walled garden and ancient yew hedges. Make time to explore inside too – the Long Gallery, with is molded ceiling and collection of 10,000 books, is worth the entrance fee alone.

Next stop, Aylsham, a traditional old Norfolk town with a difference: it’s one of only five UK Cittaslow towns, a designation that highlights the quality of life and community spirit. At Aylsham’s heart is its marketplace, which is surrounded by 18th-century houses and is the hub of local activity – twice-weekly markets, monthly farmers’ markets and numerous events year-round. There are lots of tempting shops, pubs and tearooms – maybe grab a bite at the Black Boys, right in the centre, and watch the world go slowly by.

Overnight in Aylsham – see Accommodation, left. Alternatively, from here you can catch a bus or train (the nearest station is North Walsham) back to Norwich.

The Norfolk coast has a variety of accommodation, from hotels and hostels to family-run B&Bs and campsites. Here are a few of the many options.

The Norfolk coast offers excellent walking, with easy, level strolls and some surprising undulating sections too.

The area of the Norfolk coast around Aylsham and Sheringham is particular rich in history, from prehistoric settlements to elegant country houses. There are opportunities to get hands-on too.

Sheringham and Cromer are reachable by train from Norwich. The nearest train station to Aylsham is North Walsham (11km east); buses run Aylsham-Norwich. Various bus routes also provide public transport options along the way. This coastal part of North Norfolk has a reliable Coasthopper service operated by Sanders Coaches. This enables most parts of this route to be replaced by bus if required.