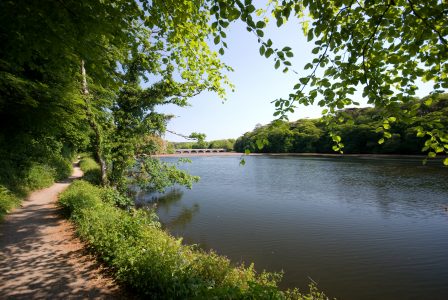 The Bosherston Lakes (Or Lily Ponds, as they are commonly called) are a series of man made lakes at the heart of the national Trust's Stackpole Estate.  They are within within the Stackpole National Nature Reserve and form part of a Special Area of Conservation.

They lie in a system of wooded valleys extending inland into a limestone plateau from the beach at Broadhaven South.   From the end of the last Ice Age until the mid eighteenth century these valleys contained spring-fed streams, fringed by swamp and wet woodland and flowing into a tidal creek bordered by saltmarsh and dunes.  The Campbells of Cawdor, who owned the estate from 1689 to 1976, created the lakes with a series if dams between 1760 and 1840.

Created principally as a landscape feature, the lakes now support nature conservation features of European importance, with populations of rare animals including otters, plants including curled pondweed, white water lilies and stonewort, and insects including over 20 species of dragonfly.

To visit the lakes, car parks at Bosherston village, Stackpole Courtsite and Broadhaven South will give you close access to the lake systems.

The Water lilies are best seen from end of May to August.   Otters are spotted all year round, though early morning is the best time to spot them.

You can find out more information at www.nationaltrust.org.uk/stackpole