Sensitive tree safety work along the SDW at Shavards Farm in the Meon Valley, Hampshire have been completed and the trail reopened.

The Ash trees of the UK are under threat from a fungal infection. The disease commonly called Ash Dieback or Chalara, is caused by a non native fungus from eastern Asia called Hymenoscyphius fraxineus and our native Ash trees have little defence.

Ash trees are very common in the South East of England and some sections of the South Downs Way are lines with mature Ash trees. Unfortunately once infected the trees over a few years die back and their branches become brittle and break. It is therefore important to monitor their condition and remove trees that have a potential to drop branches on the Trail.

The canopy of the trees at Shavards Farm in Hampshire had died back over 75% and last week contractors with specialist equipment removed the most hazardous trees along the Trail. Mature trees are an incredibly valuable habitat, so the National Trail team employed ecologists and bat specialists to survey and assess each tree.  Some trees were left if leaning away from the Trail, others were left as monoliths, with their main branches removed, but leaving valuable bird and bat roosting habitat. In all about 80 Ash stems were removed.

Help us celebrate International Trails Day by sharing your memories on social media.

Surfacing improvements in the Meon Valley are complete

The 1.15km section of the South Downs Way, at the foot of Old Winchester Hill, that links the Meon Valley Trail with the Monarch’s Way has been transformed.

Work is underway at the White Bridge Alfriston, East Sussex

The South Downs National Park Authority will be carrying out surface repairs to Public Bridleways Afriston 2c and Cuckmere Valley 26, which form part of the South Downs Way National Trail.

The work will enhance the structure of the ramp leading up to the bridge and to improve the surface condition of the public bridleways. Access improvements will also be made to the adjoining public footpaths that link to the South Downs Way.

There will be a diversion in place for the public to follow during the closure. Please refer to the accompanying maps 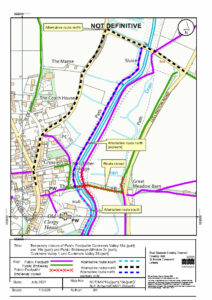 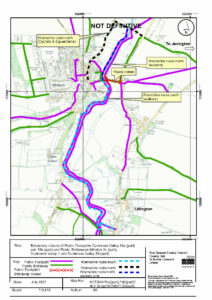 to see the extent of the closure and diversions in place. Please note, cyclists and horse riders will need to follow the diversion via North Street, Alfriston.