Nearly forty years ago three woman navigated ancient packhorse routes between Northumberland and Derbyshire on horse back. The one surviving member of that group, Dawn Baly, has described the adventure as “magic, total magic”.

She was speaking at a celebration of the 10th anniversary of the official opening of the Pennine Bridleway National Trail, held in June at the Fat Lamb Inn in Ravenstonedale in the Cumbrian part of the Yorkshire Dales National Park.

The 205-mile trail, which ends at the Fat Lamb, resulted from the ride she undertook in 1986.  A 123-mile ‘northern extension’ to Byrness in Northumberland, however, remains uncompleted.

“The raison d’etre for this magnificent route was three-fold.  One – to reclaim the ancient highways deemed redundant to modern forms of recreation and reopen them for a new generation.  Two – to support and succour that hardy but dwindling breed of upland farming communities by encouraging people to stop and stay.   Three – to place the horse at the centre of a strategy when all others failed to acknowledge its existence.

“To this Mary was to dedicate 40 years of her life. In fact it became her life.  One memorable event consisted of my mother dashing to the bed of an older sister in the throes of childbirth. Between each rising stage of excitement my mother was busy marking up maps on the hospital floor.

“It took two years of research to prepare for the ’86 ride – and 10 days to complete.  My mother threw herself into the campaign to get the route acknowledged and funded and great friends carried this forward.  This is a bittersweet moment because today the northern extension still languishes uncompleted.”

Her audience was a gathering of people who had campaigned to establish the trail as well as representatives from Natural England, which funds the maintenance and promotion of National Trails, the British Horse Society, Cycling UK, and the staff of the Pennine Trails National Partnership, which is administered by the Yorkshire Dales National Park Authority.

The 1986 ride participant Dawn Baly, from Shropshire, also gave a short speech.  She said: “I did the first journey down the route from Hexham to Ashbourne with Mary Towneley. I was a novice. It was so exciting.  The freedom of it, looking through the ponies’ ears and riding to the horizon and beyond – magic, total magic.”

Mark Weston, director of access at the British Horse Society, which has 118,000 members, attended the celebration.   He said: “The Pennine Bridleway has particular importance for horse riders. It’s a prime example of how the need to get horse riders off the road and for them to have safe access can be achieved.  The development of the Pennine Bridleway National Trail also encourages smaller loops to be developed, that join on to it, and so it acts as a catalyst for more route creation.”

Routes linking the Pennine Bridleway to the Eden Valley Loops have recently been improved.  People attending the celebration walked from the Fat Lamb Inn to a section where work has been carried out, funded by the Westmorland Dales Landscape Partnership Scheme.

Businesswoman Alison Muir of the nearby Stonetrail Riding Centre said she was booked up for the rest of the summer, such was the growing popularity of horse riding for recreation. She said: “When the Pennine Bridleway opened ten years ago I remember Martin Clunes saying at the opening, ‘It means you can go on a journey – and everyone wants to go on a journey’.  The bridleway network we have now, there is nowhere else like it in the world.  The bit people are seeing today linking the Pennine Bridleway and the Eden Valley Loops used to be pitted and slippery. I used to have to tell people ‘watch where you go’. Now it is good to ride on.”

Sara Schultz, who is Northern National Trails Manager at Natural England, said she was keen to take part in the celebration:  “Natural England is very proud of the lengths that the lead partner – the Yorkshire Dales – has taken in leading the new Pennine National Trails Partnership forward to really promote the Pennine Bridleway as a multi-user route particularly for horse riders, cyclists and walkers.  A lot has happened in ten years.  It resonates with us that National Trails are important.  We continue to fund them and will do into the future I hope.”

Adam Peters, who was the Cycling UK representative at the celebration event, said:  “Cycling UK is enthusiastic about long distance trails. Two-thirds of the population is too scared to cycle on the road.  So this is the kind of route that at least the fitter members can tackle. We think there’s a lot of potential for cycle touring on the route.  We think it’s a great resource and we’d really like to see the northern extension completed.”

“One of the main objectives of the partnership is to continue the National Trail northwards from what is – at the moment – the official end point here at the Fat Lamb. We’ve got a way to go until we get to Byrness but it’s still very much the ambition of the partnership.”

Officially opened on 12 June 2012 by Martin Clunes as President of the British Horse Society, the Pennine Bridleway is one of two National Trails through the Yorkshire Dales National Park. The other is the 268 mile Pennine Way, the first National Trail to be created in 1965.

The 205 mile trail was officially opened on 12th June 2012 by President of the British Horse Society Martin Clunes (pictured below at the opening) in a day of celebrations with horse riders, walkers and cyclists coming together at Far Moor Bridge in the Yorkshire Dales.

To mark this milestone, over the coming weeks we’ll be looking back at the fascinating history to the trail, exploring locations along the route and sharing information to help you get out and explore the Pennine Bridleway for yourself.

We’ll be posting information on the news pages here and if you follow the Pennine Bridleway on Facebook (@PennineBridlewayNT) or Twitter (@PBridleway) you can get alerts for all the information as soon as it’s available.

A group of horse riders

‘Big skies all the way’

The Pennine Bridleway hosts The Great Horses for Health Relay

Works due to commence in Spodden Valley

Works affecting the Pennine Bridleway in the Spodden Valley are due to commence on the 12th July.

The Pennine Bridleway will remain open at all times, but a rolling work area along the trail will be in place. Warning signs will be in place at either end of the section affected, and works will stop as soon as practicable to allow users of the trail to pass safely.

There will be works to trees taking place first, followed by path improvement works. Works are likely to take 6-8 weeks in total.

Thanks and support for Pennine Bridleway volunteers

This year, International Trails Day also coincides with Volunteers Week and we want to say a huge thank you to all the amazing volunteers who give their time and expertise to help maintain the Pennine Bridleway.

Volunteers play a vital role in the maintenance of the Pennine Bridleway, particularly in Derbyshire, Lancashire and the Yorkshire Dales.  They get involved in a variety of work including replacing gates, repairing fencing, drain clearance and installing waymark posts and fingerposts.  The time they give and experience they bring are invaluable in helping to maintain the trail to its high standard and ensuring everyone using the trail has the best experience possible.

Whilst volunteers generously give their time for free and enable work to be carried out which could otherwise not be completed, volunteer programmes are not free to run.  Every volunteer needs to be supported to fulfil their role safely and effectively.

How you can help

(Please note you will be directed to the website of Yorkshire Dales National Park Authority who manage the collection of donations on behalf of the Pennine National Trails Partnership).  Thank you for your support.

The Pennine Bridleway has been temporarily closed due to a collapsed wall near Birch Vale.

The Pennine Bridleway has been closed to allow repair works to take place to the collapsed wall. Unfortunately there is not an obvious diversion route for users to take in the mean time. Please bear with us; the trail will be opened again as soon as possible.

The Pennine Bridleway has been closed at Church Road in Uppermill due to a damaged bridge.

The bridge which crosses Church Road on the Pennine Bridleway in Uppermill has been demolished due to irreparable damage. There are two diversions in place, one for horseriders and cyclists and a different one for pedestrians. Please see the links below for more details of the diversions. Options for replacing the bridge are currently being investigated.

Diversion for horseriders and cyclists

The Pennine Bridleway has a new leaflet, an upgrade on the last one published in 2008 – before most of the route was open!

It provides a summary of what the Pennine Bridleway has to offer; an amazing long-distance route through classic Pennine scenery with miles of off-road tracks, safe road and river crossings, and no stiles or steps to negotiate.  A 205-mile Adventure on Horse, Bike or Foot

Its first outing will be at an international tourism trade event in Utrecht: Fiets en Wandelbeurs.  This is a walking and cycling specialist show and is aimed at encouraging Dutch visitors to spend time exploring the Pennines and enjoying the Northern hospitality.  The National Trail Officer from the Cleveland Way is already booked to attend the show and will be championing all of our National Trails.

You can download a copy here to read online or print for yourself. 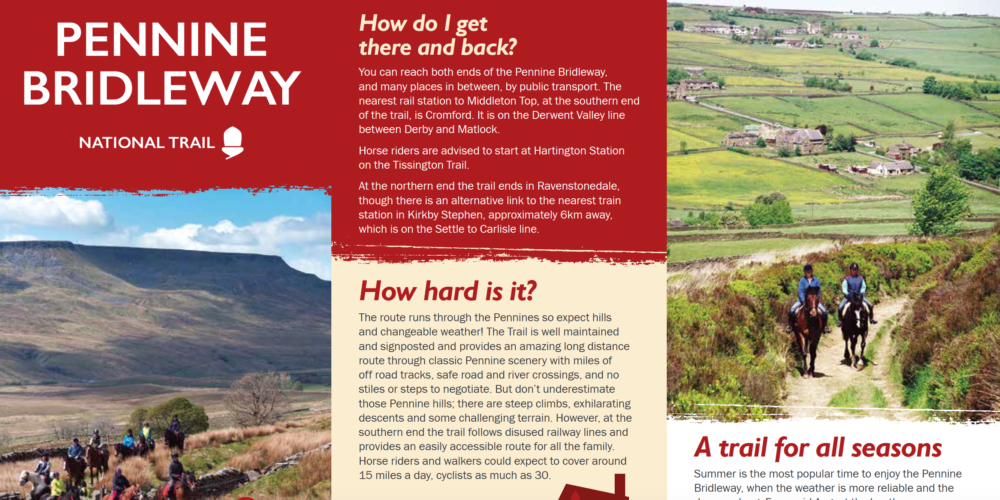