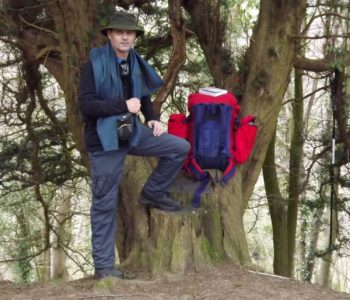 Offa's Dyke Path was the first long distance trail I'd walked.  Actually, it was the only trail of any length I'd walked at the time.  Having built up a good level of fitness through several years of daily jogging, I hadn't expected to be overly tested by the seemingly sedate form of exercise known as walking.  What I hadn't taken into account was the fact that when I went jogging I didn't do so while carrying a rucksack loaded with everything just short of the kitchen sink.  As a consequence, by the time I reached Monmouth ( having started out from Chepstow ), my feet and shoulders were masses of blisters, and my quads felt like they'd been well worked over with a meat tenderiser. With some trepidation I decided to continue on to Pandy, not with any great optimism I might add, and fully expecting the sight of the looming Black Mountains to be a more than sufficient deterrent to extending the folly into a fourth day.  However, as I stumbled out of Monmouth I met a fellow walker also heading for Prestatyn, a bloke called Martin who was a veteran of the Pennine Way. He encouraged me to persevere - and persevere I did, all the way to the North Wales coast. Having found that the pain from my myriad blisters tended to fade after the first mile or so, I was then able to enjoy the wonderful Welsh border country and what turned out to be particularly sunny Spring weather.  So enjoyable did that first walk turn out to be, I attempted to retrace my steps exactly thirty years later.  Alas, on this occasion the blisters and other foot ailments reached a level beyond which even the most stubborn determination could not triumph.  I had to call it a day in Knighton - half way at least and leaving me with the goal of one day returning to complete the "top half" for a second time.