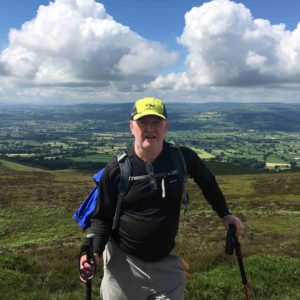 It took us 12 days to hike from Chepstow to Prestatyn and we completed the walk on June 26. The weather wasn't the best. We had lots of rain and a bit of hail going over the ridge to Hay-on-Wye. We have done several walks in the past €“ the Coast to Coast, the Great Glen Way, and Dingle Way €“ so the weather was not surprising and we carry all types of wet weather gear. We thought the walk was a bit more difficult than the Coast to Coast, but that might be a function of age (59 and 57, respectively).Within the first 30 minutes of the walk, we almost ended up as a €˜cow casualty'. We took a cab from Chepstow out towards the commemorative stone in order to begin at the official start. Just before entering the housing estate, we had to cross a small field containing about 30 cows. We didn't think much of it €“ we have walked by cows before €“ but we failed to see the calf. As we crossed the field, the cows (and one ornery bull) drifted towards us. Pretty soon they formed a wall about 15 feet away. The bull lowered his head, showed us his horns, and began pawing the ground. He was ready to charge. We walked backwards rather slowly. I extended my hiking polls and began hitting them against each other. The herd quickly diverged and circled us from behind. We didn't realize cows were so organized. But their movement opened the path and we ran for it! It really got our hearts pounding.Over the next couple of days, we took care to walk around the larger herds via alternative footpaths and roads. For some reason, they like to stand directly on the path and block the way. By the end of the walk, our €˜cow confidence' had developed and we had no difficulties. Our off trail activities consisted of drinking real ales (Butty Bach and Offa's Pride topped our list), following the Dragons in Euro Cup 2016 (I watched the semi-final loss to Portugal back home), and conducting an informal Brexit poll. Our polling leaned heavily towards €˜Leave' but we thought that was a function of the rural setting. We were surprised at the final result. We entered Kington hearing of a €˜festival' and dreaded the thought of a crowded town but we arrived in time for the fortieth anniversary of the Kington Wheelbarrow Race. Think of it as a very fast pub crawl in a wheelbarrow. The highlight of the trip for me was chatting with Chris Mills in the Barley Mow in Trefonen. Chris heads a group called €˜Lights Out Trefonen' which is currently commemorating the involvement of Trefonen in World War I and the thirty-one locals who lost their lives in the war. We chatted about the project, the Somme, Wilfred Owen, and Siegfried Sassoon while drinking the local ale. That was the end to a perfect day.