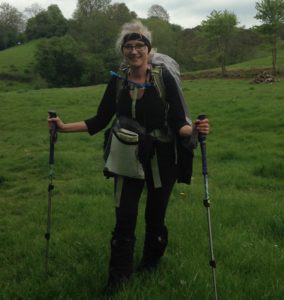 I wanted to go on a long walk, a Really Long Walk, to celebrate being 62, and still able to WALK.  Two years ago I completed Wainwrights Coast to Coast route in England, round trip, and a bit beyond (back to the Lake District for additional daily walks), and this time decided to follow up on Offa's Dyke Path as that had been high on the list in 2013.  Added in Glyndwr's Way to make the walk longer, and fully apprecitate a country.  My goal was another "epic" trek in length to not only get in a very long walk, but to feel that the country, landscape, history, and people were fully imbeded in my memory.  Decided 35 days of hiking in Wales, with no rest days, was the answer to my walking urges.I carried all of my possessions in my backpack which weighed about 30 pounds.  Stayed in B&B's, or hotels everywhere which were organized and arranged by Celtic Trails.My trek began in Chepstow on May 14.  On May 20 after staying in Knighton my walk turned West onto Glyndwr's Way, for a week, reaching Welshpool on May 29.  From there walking continued north on Offa's Dyke Path to Prestatyn which was reached on June 4.  The next morning walking began southward and after two weeks reached Chepstow on June 17.  It was hard to believe it had been accomplished and had ended.The combined round trip of Offa's Dyke Path (minus 30 miles on the route north), and one way on Glyndwr's Way proved to be a rewarding experience.  The paths were VERY WELL sign marked, although I still tended to wander off and miss read directions (but smile, that was part of the mental challenge), the landscapes were amazing, the difficulty of the trails were at times challenging, but after a couple weeks of walking the body became stronger and the hills smaller in size, even though they had not changed.  Absolutely every person encountered was friendly in the extreme, whether they were fellow hikers, hosts at B&B's, or local people in the villages.  Felt perfectly safe everywhere, everyday.  Personal stories of local people and their own histories made Wales truly come alive for me, so the walk became far more than trudging through a landscape and trying to accomplish so many miles daily, in so many weeks.  There was also the appreciation for what a wonderful set of National Trails, and other walking paths, Britian has to offer.  The idea of walking across private pastures, private farm yards, and through private woods, etc. is such a novelty for a person with my background in the United States where we can Not just go walking across private land, and certainly there is no fence, gate, or stile, to escape the enclosed space often full of adorable sheep and mooing cows.My trek involved meeting up with other people whom I had met and stayed with when hiking the C2C.  What a small world it has become when on an isolated mountain top in northern Wales random people are encountered.  Greetings exchanged, and suddenly there is the realization that We Had Met Before.Throughout my walk I was able to connect to the Internet (the outside world) every night, in one way or another, and was able to post daily updates to a Blog.  If interested I would be pleased to share my adventures with any readers.  It even includes photos of Absolutely Everything I Carried in my Backpack for 39 days.Blog address is:  loisfreeberghagen.blogspot.com