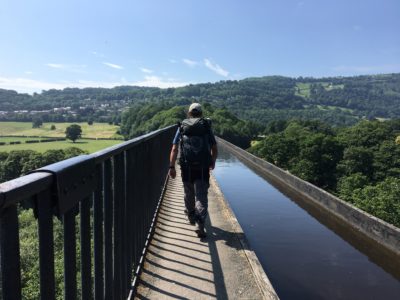 We started on 4 July by catching the train from Chepstow to Prestatyn.  Upon arrival we indulged in Fish and Chips at the seaside before we started our first days walk and overnigth camp at Bodfari.  Frustratingly, numerous signage of the acorn had been removed, whether it be walkers looking for momentos or the locals objecting to the invasion of the intrepid walkers taking up the Offa's Dyke challenge.  All I can ask is that please leave the signage alone so that future generations can enjoy this lovely (although arduous trek).  Day 2 saw myself and Andy set out across the Clwydian Range a hot humid day for our major ascent and descent of the route.  Fortunately, when running low on water we came across a small car park with a shephards hut offering coffee and Ice cream which was most welcome.  It was also a point where the kind lady topped up our water before we were on our way again to Llandegla for overnight stop.  Day 3 was a long day with little features apart from the fastastic walk passed World's End and in the shadow along Ruabon Mountain beofre crossing the aquaduct from Trevor to Froncysyllte.  we finally arrived at our overnight stop, Dingle Cottage B&B (a delight after a long few days on your feet and bedding down in a small tent) at Trefonen.  Day 4 involved watching the Seven flow North (very Strange!) and dodging angry looking dogs and Bullocks along the river to Buttington Bridge for our next campsite. Day 5 saw us head to Mellington (Andy Melling thought he may have found distant relatives, but his hopes were dashed and he was cheered up over a beer in their bar!) Hall and the first real glimpse of the ancient dyke.  Another nights camping with excellent facilities and a peaceful setting (apart from the 50th Birthday party and the Wedding party!), although there was a nice vineyard at the end of Mellington Hall drive which proved delightful on the walk into the Hall (closes at 4 pm).  The next day we hit the Shropshire Hills (although not as severe as the Clwydian Range) a lot of ascent followed immediately by descent only to regain the height again seemed to be the theme of the day, accompanied by hot humid weather with little breeze to cool us.  We finally reached Knighton, but were dissappointed to see the Offa's Dyke visitors centre is only open 10 to 4, which few intrepid walkers would ever make that time (please open for an hr in the evening, so the walkers can visit also!). Next day we were off to Kington where a night of extravagence was awaiting us in the form of the Burton Hotel, along with pool, jacuzzi, sauna and stream room - shear bliss!!  Day 7 and finally the weather broke, a day of persistant rain, requiring numerous sock changes to prevent blisters, as mid afternoon and every thing was wet Irrespective of how good the waterproofs were).  Glad to reach Hay-on-Wye and attempted to dry as much kit as possible in preparation for day 8 to Pandy.  Fortunately the rasin abated the next day and slight cooler weather welcomed us, although the filed of long grass were still enough to ensure our legs were getting wet up until we climbed Hay Bluff and headed down the ridge at an astonishing 6.3 km per hour,  Finally we dropped off the ridge and headed into Pandy and had a cold cider over ice, which was nectar to the taste buds! Next morning the tents were dropped quickly and we were off again, heading to Monmouth and another comfy bed in the Queens Head, here we were met by the parents of the young lady (Abbie 17) who passed away last year and was the reason for the walk in aid of a charity which looked after Abbie in the latter stage of her life.  They had travelled from Elgin in North Scotland to walk the last day with myslef and Andy.  The last day was started with a full cooked breakfast prior to setting of up the Kymin at 0830.  As we passed through Redbrook we had a quick stop at the Post Office and decided it was time for Ice cream.  Once consumed we were on our way again, as per previous days we monitored the hedgerows for foraging activity finding wild sorrel, strawberries, bilberries, raspberries and occasionally, cherrys from trees.  The route transpired to be a foragers paradise.  Lunchtime we arrived at Brockweir, where we were met by more friends form North Wales and Devon, we all decided to stop for a bite to eat in a local hostelry (Ploughman's!!) which contained the biggest slab of cheese.  we finally prised ourselves away and continued the walk towards Devils Pulpit were a further 2 work colleagues joined the party for the walk in.  The weather was also on our side with sunshine and moderate temperatures. As we approached Chepstow and the Seven Bridge was in sight, it was time for photo's.  we finally moved on again for our final target of Sedbury Clffs, as we approached a party of family and friends were waiting to recieve us with a chilled beer and high praise on our achievements.  More photo's and then headed for a shower prior to heading downtown for a beer to clebrate our achievement with our friends and family.  An exhausting and challenging walk, with excellent views and sense of achievement.