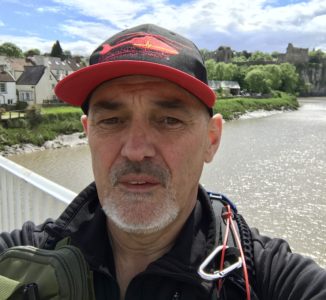 I walked Offa's Dyke path as a charity hike for the Midlands Air Ambulance over 13 days starting from Sedbury Cliffs, Chepstow. I'm not a seasoned hiker, more a daily dog walker so this really was a challenge for me particularly as I would arrive in Prestatyn on my 63rd birthday.It was a tough hike in places but then of course, that was the point to it. If it was easy we'd all be doing it. No such thing as strangers, Just friends we are yet to meet.The first half of the hike to Knighton I had the occasional company of a couple from Germany, Frank and Fabienne, a couple from Holland Eric and Jenneke and a couple from Placitas New Mexico USA Ken and Marlyce. We didn't always walk together but we bumped into each other frequently and caught up on the odd evening too. Many pleasant memories will live on.Occasionally friends would join me for moral support, James Burrows, the manager of my local pub set out from Longtown on my Llantilio Crossenny leg, we met up just outside Pandy and had a great walk together up to Hatterall Ridge and of course the obligatory beer in the Crown, my accommodation for the night.The next day a friend and colleague Pete Rance joined me for the Longtown to Hay on Wye section. It was a blisteringly hot day but we managed a reasonable pace despite the steep climb back up the the path. The now customary beer was very welcome when we arrived at the Blue Boar.I was beginning to feel like royalty with all the visitors around me and particularly when The National Trail Officer for Offa's Dyke Path, Rob Dingle came to meet me in Kington, you guessed it, in a pub. We had a good long chat about the path and my fund raising.Several hot days turned into Muggy and humid then a mixture of conditions. Knighton to Brompton was very tough and took me the longest time but I think the Clwydian Range can count itself up there on the tough scale.Above Llangollen I was joined by another friend Christian Baker, a seasoned hiker who had stayed in the hills in his one man tent, he left me at Llandegla forest to seek out another camping spot, I felt for him as I got further away and saw the weather closing in over the mountains and also catching me fast.I eventually got to Prestatyn on the 2nd June, at 14:43:05 This was important that I record this as there was a sweepstake on my finish time which raised a further £180 for MAAC.Chris made another appearance at the finish point with a bottle of fizz to celebrate my achievement but the biggest achievement and one I'm humbled by and very proud of is raising over £2500 for the Midlands Air Ambulance, especially as my original target of £1000 I believed to be 'Pie in the sky'If you're considering doing Offa's Dyke path I suggest you do it sooner rather than later, I waited over Forty years to get around to it from my original idea. Maybe I should have done it sooner when I was younger and fitter. Nevertheless, I did it.Andy Frizzell ( http://OffasDykeChallenge.com )