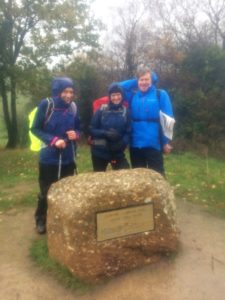 We began the Offa's Dyke Path on 28th November 2015 and had a very wet and muddy walk to Pandy. We continued in April 2016 from Pandy to Kington in improving weather. In June we continued from Kington to Welshpool and were soaked on the way. In August we hiked from Welshpool to Trevor. We completed the ODP in early October 2016 arriving in Prestatyn on Thursday 6th October. We very much enjoyed walking the full ODP which was generally well marked, though a good few way markers need replacing.We met very few other ODP walkers on any of our five sections and of those we met a good number were foreign.Our thanks to those who work to keep the route in good condition.Alun Davies 2nd November 2016