Explore the west and central highlights of Hadrian’s Wall on a four-day adventure in the company of Roman legionnaires, Mary Queen of Scots and red squirrels

Stretching east-west from Wallsend to Bowness-on-Solway, within the Solway Coast Area of Outstanding Natural Beauty (AONB), Hadrian’s Wall remains one of the most remarkable accomplishments of engineering by an empire well-known for its impressive building feats. No wonder Hadrian’s Wall has been designated a UNESCO World Heritage Site. The National Trail that follows this ancient boundary measures 135km; this relaxed route focuses on the central and western sections of the path – areas rich in incident and intrigue.

It’s here, where Hadrian’s Wall crosses the wilds of northern Cumbria, that you’ll discover the formidable barrier’s longest surviving stretch of at Birdoswald; where you’ll enter vibrant Carlisle, a borderlands city with a turbulent past (and, now, great bistros and bars too); and where you can trace the wall and the river right to the coast, where 2,000 years of history slide serenely into the salt marshes and the sea. There are excellent walks to follow, splendid sites to be seen and, at the end of each day’s explorations, always cosy inns in which to rest. 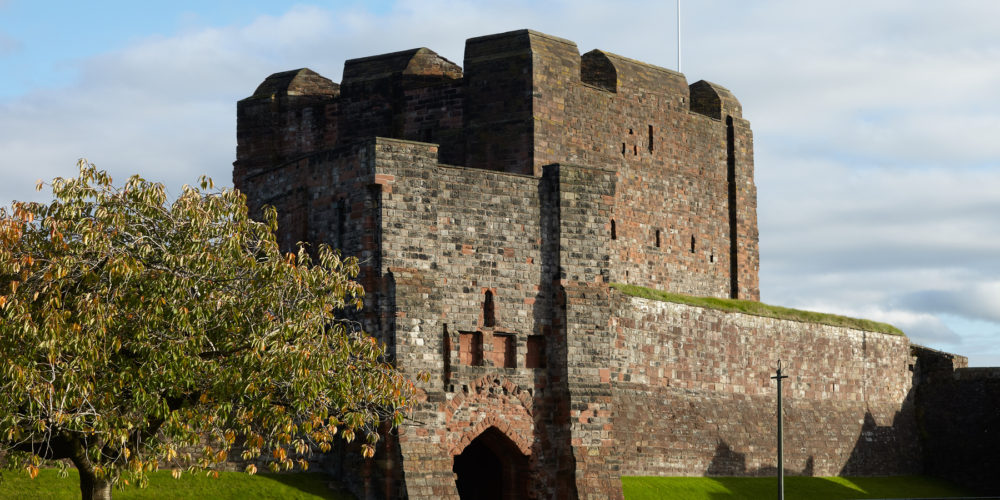 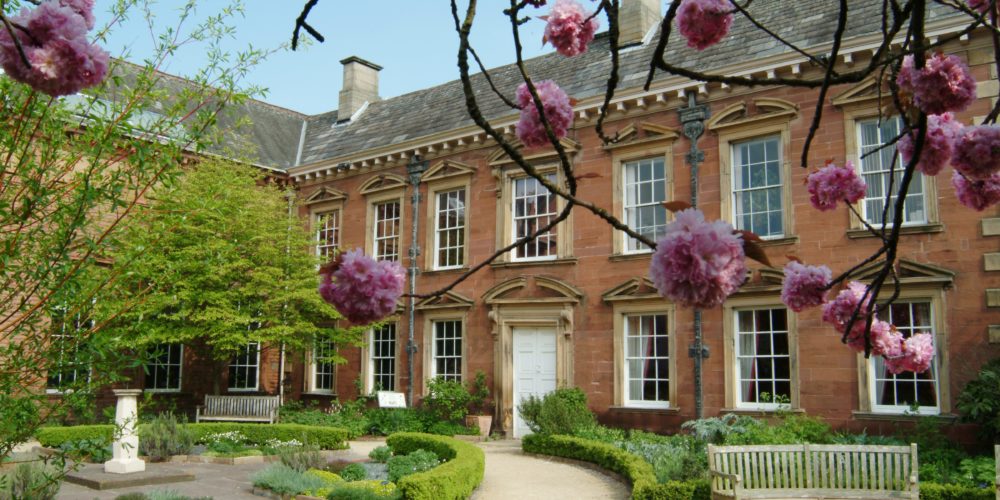 Here’s everything you need to help you plan your very own walking and exploring break in Cumbria’s Hadrian’s Wall Country. Click on the blue arrow tabs below for more information. To save this itinerary to view later, use the Save to My Rucksack button at the top of the page.

Plot a four (or more) day adventure along the western section of Hadrian’s Wall. Spend two nights in the pretty market town of Brampton and two nights in lively Carlisle, both good bases for exploring, whether you’re travelling by car or public transport

Start right in the middle: the pretty market town of Haltwhistle lies at the geographic centre of Britain. It’s also very handy, with a train station and an array of accommodation. From Haltwhistle, head for Greenhead (by car or on the AD122 bus). The Roman Army Museum here will transport you back 2,000 years to experience what life was like for a legionnaire on Emperor Hadrian’s British frontier. Learn your Latin and fables from a Roman teacher, marvel at the coins and weapons found at nearby excavations and immerse yourself in the ancient world.

Next, drive (or board the No 185 bus) to Birdoswald. Perched high above a meander in the River Irthing are the extensive remains of a Roman fort (English Heritage), once the base for 1,000 soldiers, and the longest surviving stretch of Hadrian’s Wall. Learn the story of this remarkable site at the Visitor Centre before striding out along sections of the wall: east, to discover turrets, milecastles and the Roman bridge at Willowford; west, along the ditch and turf wall, toward Bankshead. On your return, pop into Birdoswald’s cosy tearoom, the only spot on Hadrian’s Wall serving authentic burgers – the fast-food fave was actually invented by the Romans.

Buses run back to Haltwhistle, where you can catch the train to Brampton, an ideal place to overnight – just as Bonnie Prince Charlie did, during the Jacobite rising of 1745. There are many options – see Accommodation, left.

The market town of Brampton is a handsome cluster of old red sandstone buildings, enveloped by the rolling countryside of Geltsdale and the Irthing Valley, with peaceful woodland nearby. It’s the a great base for a number of walks.

Start with a gentle stroll to Lanercost Priory, first passing the glacial ridge on which lies Brampton’s Mote mound, remnant of a medieval castle, and now topped with a statue of the 7th Earl of Carlisle. Spectacular views line the way to the Augustinian priory of Lanercost, remarkably well-preserved given its frequent sacking during the Anglo-Scottish wars; King Edward I himself lay sick at the priory for five months just before dying on his final campaign. Admire the 13th-century church’s graceful arches and peaceful cloisters, hunt out the pilfered Roman stones and, before returning back to Brampton, stop at the lovely Lanercost Tea Room, for delicious homemade treats in the cafe and Cumbria-made goodies in the gift shop.

This afternoon, take in Talkin Tarn Country Park, just two miles south of Brampton. A delightful circular trail runs around the lake, amid the mature woodland and swaying meadows. Keep your eyes peeled for the locals: blue damselfly, roe deer and red squirrels. For a different perspective, take out a rowboat or stand-up paddleboard to explore at water-level, followed by a cuppa and a slice of cake at the waterfront Boathouse Tea Rooms.

Overnight in Brampton. There are many options – see Accommodation, left.

Carlisle, a 20-minute train ride from Brampton, is a vibrant 21st-century city, with a buzzing food scene and thriving little shops. But, with its strategic location, right on Hadrian’s Wall, its seen a fair share of incident over its 2,000-year history.

Get a bit of the backstory at Tullie House Museum and Art Gallery, a Grade I-listed Jacobean building chock-full of eclectic treasures – from fine paintings to Roman coins, tattoo art to whale bones – and interactive exhibits that help reveal the city’s heritage. Then carry on to Carlisle Castle (English Heritage), which has stood stalwart in the city for nine centuries, despite countless sieges. Venture inside to hear tales of its most infamous inhabitants (climb to the turret in which Mary Queen of Scots was held captive by Elizabeth I), as well as uncovering the history of 300 years of British Infantry Regiments at Cumbria’s Museum of Military Life.

Stop for a bite in one of the city’s many eateries – perhaps Barton’s Yard, a laidback bistro, perfect for a light lunch or indulgent afternoon tea. The spend the afternoon ambling leisurely, browsing the shops and popping into the small but glorious Carlisle Cathedral – the choir’s heavenly, star-speckled ceiling is a highlight.

Day 4 Carlisle to the Sea

Hugging the shore of the Solway Firth, Hadrian’s Wall Path ends at Bowness-on-Solway, in an Area of Outstanding Natural Beauty, where sand dunes and salt marshes merge with ancient history. It makes a fantastic, sea-air-spritzed finish to this mini-adventure too.

If you’re feeling spry, walk all the way from Carlisle to Bowness-on-Solway. This flat, peaceful route along the National Trail, part following the River Eden, should take around 4.5 hours, more if you’re bewitched by the birds – look out for knots, lapwings, curlews and oystercatchers.

For a shorter alternative, catch the bus to the small fishing village of Port Carlisle and walk to Bowness-on-Solway from there. Linked to Carlisle by a canal in the 1820s, the port later became a hotspot for tourism when Victorian baths were opened here in 1844; today its waters are a refuge for migrating birds. A short loop walk starts by following the National Trail along the edge of the marsh into the quaint village of Bowness-on-Solway, where you can gaze across to Scotland and refuel at the welcoming King’s Arms.

So, the end of the trail. But not the end of the Hadrian’s Wall UNESCO World Heritage Site, which continues as far as Ravenglass. Why not extend your adventure along the Cumbrian coast and deeper into history: the tallest Roman structures in northern Britain can be found at the Ravenglass Roman Bath House, while the clifftop Senhouse Roman Museum in Maryport tells the story of Roman life through an impressive collection of artefacts.

Overnight in Carlisle or Bowness-on-Solway. There are many options – see Accommodation, left.

The itinerary recommends two nights in Brampton and two nights in Carlisle. There is also the option to extend your trip with a night in Haltwhistle at the start or Bowness-on-Solway at the end. Here are some suggestions depending on whether you are travelling by car or public transport.

For more information on accommodation and things to do along the route, head to Visit Northumberland, Visit Lake District, Cumbria and Hadrian’s Wall Country.

Many of the pubs and hotels listed under the Accommodation section also offer food, from pub classics to fine dining. Additionally, seek out some of the region’s characterful cafes.

There’s so much adventure potential in Cumbria’s Hadrian’s Wall Country. Walking possibilities are almost endless, while more offbeat fun is available too.

Ancient history is brought to life in an array of sites and museums across Cumbria’s Hadrian’s Wall Country.

The Solway Coast Area of Outstanding Natural Beauty (AONB) stretches from the estuary of the rivers Esk and Eden to Maryport, on the west Cumbrian coast. It encompasses a range of historic ports and hamlets, nature reserves, rippling dunes and high levels of biodiversity. To the south lie Whitehaven, St Bees (the start of the Coast to Coast trail) and Ravenglass, the only coastal town in the Lake District National Park and uniquely positioned within two UNESCO World Heritage Sites.

Suggested walks should take between one and four/five hours. Overall, they are graded fairly gentle to moderate.